+65 9238 6601 (Mdm Ang Kehsin)
The tradition of putting an ancestral tablet (also called spirit tablet, ancestor pedestal or memorial tablet) is part of the Chinese history which came from the old generations and has been passed down. Ancestral Tablet are the pivotal point in a house, to remind family members about the existence of their ancestors and keeping the family together in a bloodline which originated from the past. 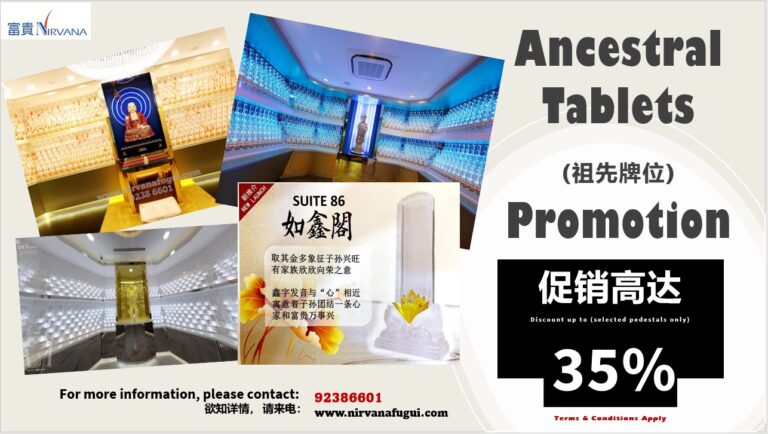 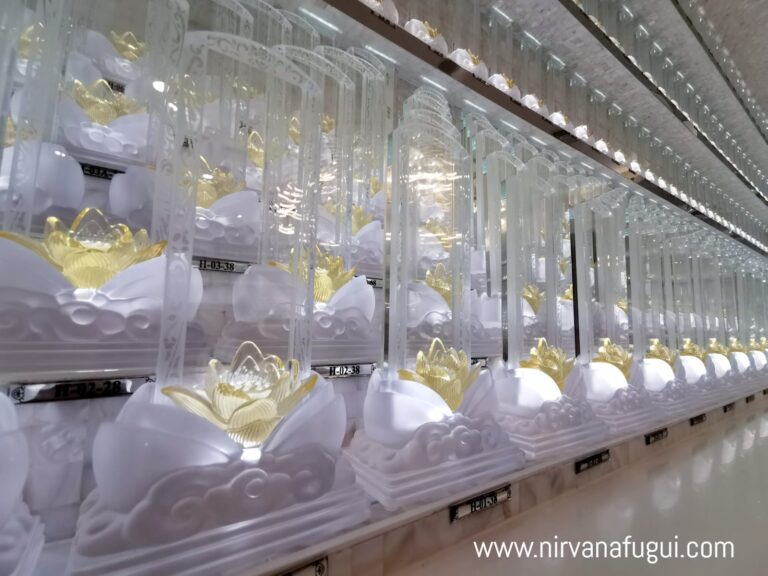 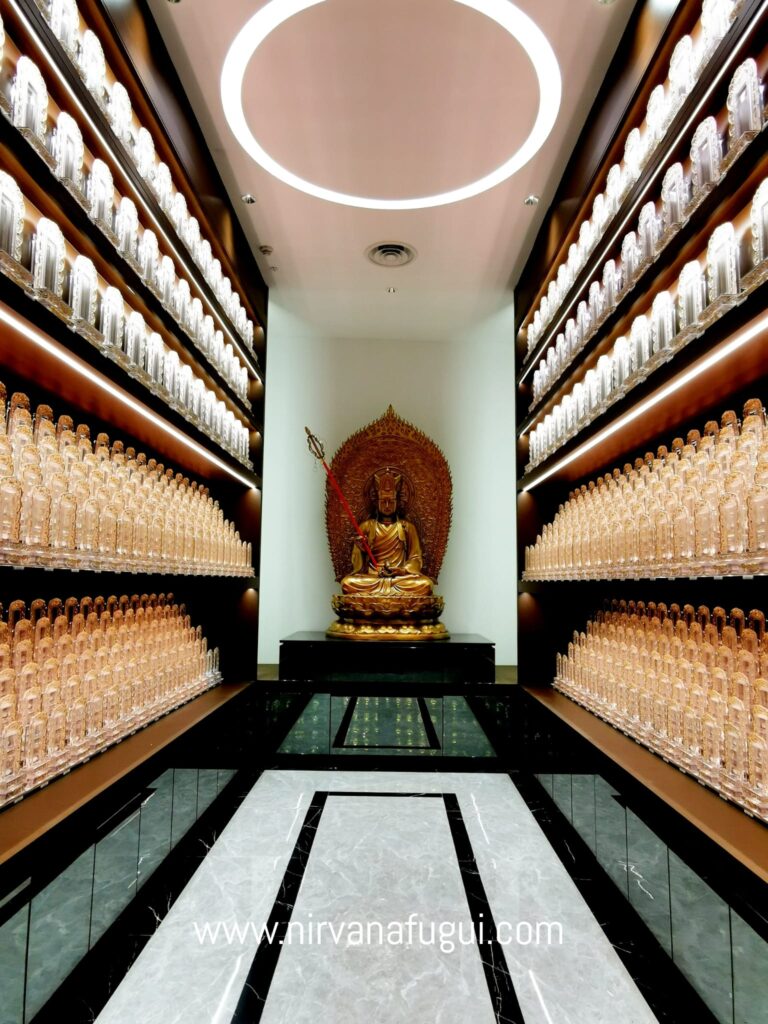 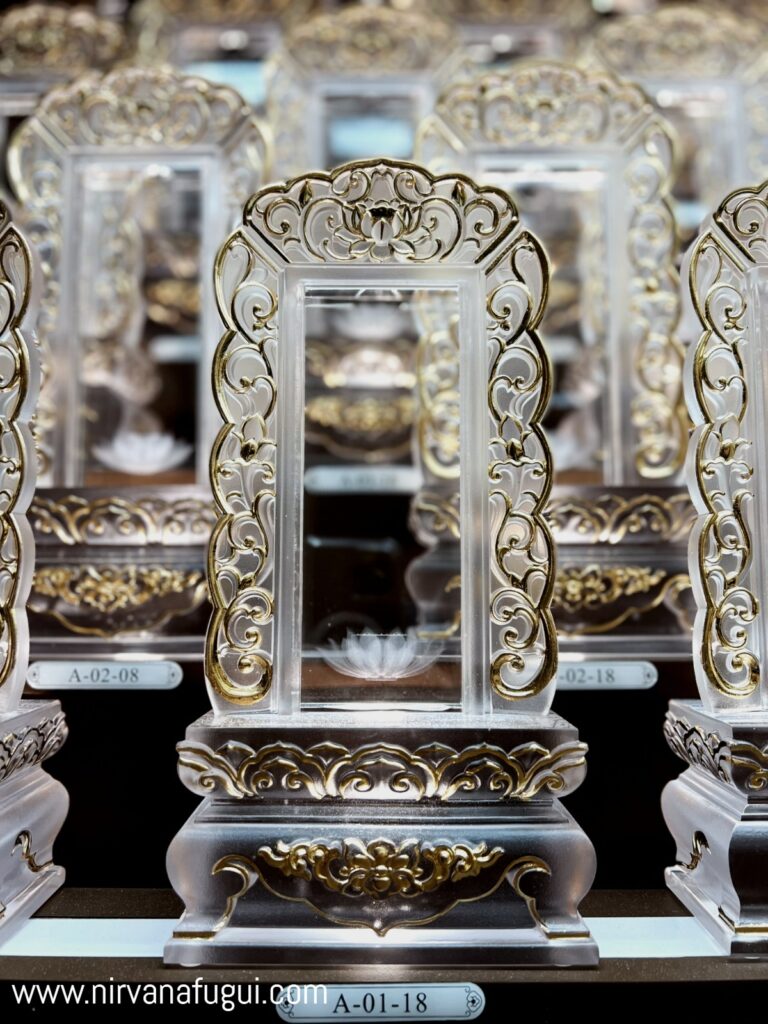 Nirvana Memorial Garden have created the suite rooms to locate Ancestral Tablet (also called spirit tablet, ancestor pedestal or memorial tablet) to revive the commemoration and remembrance of ancestors. The Ancestral Tablet Suites make sure visitors have a good place where they can pay respects to loved ones who have departed.

Due to the changing lifestyle in the city and space limitation in modern homes,the practice of placing ancestors tablet still remains but mostly in temples. Fulfilling the duty towards filial piety, the simplicity of dedicating an Ancestral Tablet to ancestors is now made possible with the introduction of this ritual made available by Nirvana Memorial Park which brings a revival of remembrance and commemoration.

The Features of Ancestral Tablets:

Most of the ancestral tablets of Nirvana Memorial Garden are made of crystal glass. Commonly used are flowing water shapes with the lotus. They are decorated with the Mandala flowers which symbolize good luck for all generations.


Nirvana Memorial Garden​ also provides services and ceremonies to relocate the ancestral tablets from home or other temples to Nirvana’s suite rooms.

The origin of Ancestral Tablet / Pedestal ​

There was a farmer named Ding Lan in the Eastern Han Dynasty. Due to his father’s early death, he was raised by his mother. He often talked badly to his mother because of his bad temper. One day, Ding Lan went to work in the field as usual, and was very surprised to see the lambs on the road kneeling and sucking the goat’s milk; then the old shepherd taught him the principle of “kneeling lambs”. He felt ashamed for his bad behaviors on his mother.

On that day, Ding Lan’s mother was late in the field to deliver the meals to him. Ding Lan saw her mother and was ready to greet her and confess to his mother. However, his mother fell into a river because she was afraid to be scolded again. Ding Lan quickly searched through the river for his mother, but found only a piece of wood. After grief and sorrow, he took the wood home and enshrined his mother’s name in the main hall of the house. Since then, everyone has imitated his manners, worshiping wooden signs as “Ancestral Tablet” and spreading the traditional virtues of filial piety and gratitude.

According to China’s traditional customs, after the death of a person, his or her family must make a tablet for them, as a place of retreat after the soul of the deceased leaves the body. The size and shape of the tablet vary. Generally, it is made of wooden boards and has a rectangular shape. It has a base so that it can stand on the table.

In ancient times, the old Song style (strokes were thick and thin) and vertical top-down writing were used. In modern times, block letters and other fonts are used to show solemnity. Throughout the ages, ancestral tablets have been widely used by people to commemorate deceased loved ones and deities (referring to the gods of heaven and earth), Buddhism, and ancestors.

With the change of history and the progress of the society, the residents of the city use fewer and fewer commemorative memorial tablets. Generally, photos and portraits of the deceased are placed or hung as objects of commemoration. In recent years, some domestic funeral service units have continued to reform and innovate in order to carry forward the excellent traditional funeral culture. They have designed and developed small tablets of materials such as marble, jade, and plastic, which are matched with urns for people’s worship. This is not only in line with traditional folk customs, but also safe and labor-saving, and is generally accepted by the most people.

Your enquiry will be replied in 24 hours